Get ready to make boredom walk the plank with Quickspin’s Treasure Island pokie game. Based on Robert Louis Stevenson’s similarly titled seminal novel, the game offers Australians the chance to join the crew of one of literature’s most famous pirate ships as they sail around looking for some sweet booty. Read on to find out more. 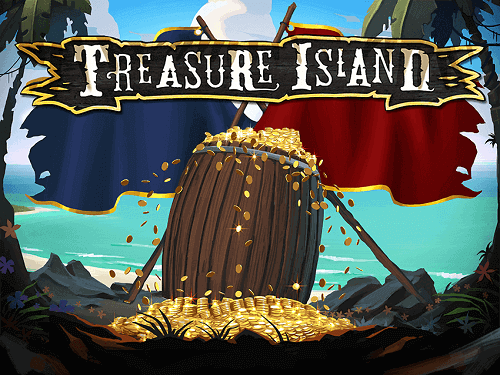 Treasure Island is a pokie game with five reels, four rows, and a total of 40 paylines. As the name may have already suggested to some players, the Quickspin game is pirate-themed. All characters are drawn to appear as cartoony caricatures of the characters they represent from the novel of the same name.

The title makes use of a fairly standard symbol theme for Quickspin. Playing card designs are mixed with some theme-appropriate designs. Some symbols refer to the game in particular including Long John Silver, Ben Gunn, and Jim Hawkins. There are two wild symbols, and they are represented by a treasure chest and a TNT barrel. There is also a bonus scatter symbol which is illustrated as a compass.

Treasure Island makes use of two unique bonus features. The first is the “Pirates Attack” feature which is activated by landing two TNT symbols on the reels. The ship behind the reels will then begin firing randomly at the reels turning every symbol it hits into a wild. If it hits a wild already present on the reels, it will explode turning the reels around it into wilds too. Players will then respin the reels with the wilds locked in place for a massive win.

The second bonus feature is that of the Treasure Island bonus. Players need to land three compass symbols to activate it. They will then be made to pick a compass to reveal a prize, which includes free spins, mini-games, and instant wins.

Treasure Island features a fun theme, a good RTP of 97.07%, and an interesting bonus feature design. We gladly recommend that our Aussie players give it a go.