As far as mythology-themed slots go, it isn’t really all that rare to find one based on the gods of good, old Ancient Greece. Quickspin’s Titan Thunder is yet another addition to the long list of games that make use of this rather common theme but, unlike with many other similar titles, there is actually a lot to get excited about while playing it.  Australians can win godly amounts of cash in this amazing pokie game. Read on to find out more! 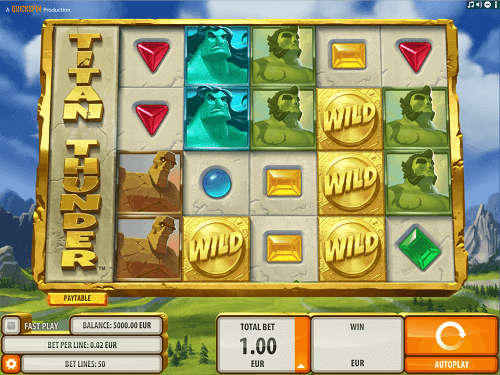 Titan Thunder is a five-reel slot with three rows and 50 paylines, along with the option of adding a sixth reel for bonus modes. The game features a clean style with rather muted colours and makes use of a background heavily influenced by the beautiful Greek plains. The sound design is impeccable making players feel as if they’re really a part of some epic event.

All of the game’s symbols are theme-related, with low-value symbols making use of multi-coloured gems and high-value symbols comprising of several well-renown Titans. The game’s wild is a simple gold image with the word “wild” on it, and the scatter is a lightning bolt across a blue background.

There are two major bonus features in Titan Thunder – the self-titled bonus and the Titan Free Spins mode. The self-titled bonus mode is triggered at random intervals – a sixth reel is dropped on to the board and eight wilds are randomly added to the reels. If any winning combinations are created on the board, they will win bonus cash.

As per usual, the Titan Free Spins bonus mode can be activated by landing three scatter symbols anywhere on the board. Players will then be rewarded with eight free spins. During the free spins bonus mode, the sixth reel will be active and the wild symbol gets an extra multiplier attached to it along with one randomly-picked titan.

Titan Thunder takes an old theme and tries to make it exciting again. It succeeds in doing so by adding a unique bonus feature that provides players with ample opportunity to win good amounts of cash. We really can’t recommend this enjoyable Quickspin game to our players enough!