Live the high life in an easy Mediterranean nation as you plan bank heists and spend cash on life’s greatest luxuries in this Quickspin pokie game. Australians can spin the reels and win some big prizes of their own in this amazing title. Read on to find out more. 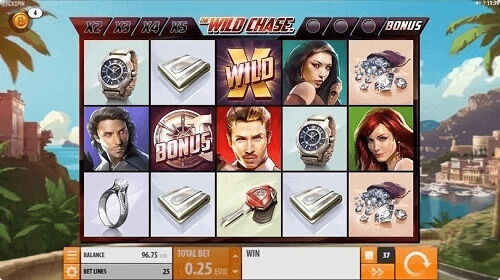 The Wild Chase is a five-reel slot game with three rows and 25 paylines. The Quickspin title makes use of superbly drawn graphics that do well to convey a sort of 70s heist film setting. Players will feel as if they really are off somewhere in some Mediterranean hot spot filled with high rollers.

The game only makes use of symbols with theme-appropriate designs and these include four different characters, a car key, a diamond ring, a watch and a money clip. The game makes use of both a wild and scatter symbol, which are represented by a big gold “X” and a safe lock respectively.

The Wild Chase has two interesting spin-based bonus features, which are described in full detail below:

The Wild Chase tries to emulate the excitement associated with a pulling off a major heist in some expensive foreign land. Australians will find playing this game very enjoyable, particularly due to its potential to deliver some absolutely massive wins