Not all that many people get to relive a childhood fairy-tale as an adult and say that they came away from it with some big cash prizes. However, that is exactly what Australian gamblers can do with Quickspin’s Rapunzel’s Tower pokie game. Play this humorous take on a Brothers Grimm classic, and you could climb your way to instant riches! 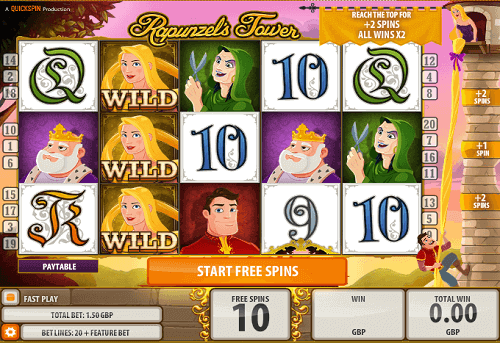 Rapunzel’s Tower is a five-reel pokie game with three rows and 20 paylines. The game retells the classic tale of Rapunzel – a princess locked away in a tower who grows her hair as a ladder for a prince who is meant to save her. The game does not use 3D graphics, but it is illustrated well and uses sound effects that complement its overall humorous theme.

As with many Quickspin games, the title’s symbols comprises of all the classic poker images seen in most pokies along with some theme-appropriate images for high-value figures. Some such symbols to look out for include the Prince, the King and Queen and Dame Gothel. Rapunzel features on the game’s two wild cards. The game’s scatter symbol takes the shape of the tower in the story with the word bonus on it.

Players interested in the game will be very pleased to hear that there are several bonus features in Rapunzel’s Tower. Two important ones to try and activate include: the Respin Wilds and Free Spins bonus modes. Gamblers will activate the Respin Wilds if three wild symbols featuring Rapunzel’s hair appear on the reels. The reels will then keep on spinning until the player gets a win.

The free spins bonus is activated when three tower symbols appear on the reels. The player is then given a total of 10 free spins with which they need to help the game’s prince climb up the tower. The prince inches his way to the top every time the hair symbol appears on the reels. Extra free spins are given out randomly, and if you make it to the top, you get yourself a cool 2x multiplier.

Rapunzel’s Tower is an interesting pokie game, filled with laughs and pleasure. Australians can expect a memorable time when playing this great slot, which they can do at any one of the casinos featured below.