Rise up from the ashes and claim your riches with Quickspin’s Phoenix Sun pokie game! Inspired by Ancient Egyptian-mythology, the game makes use of enticing gameplay features and novel designs that will see Australians playing this title for hours on end. 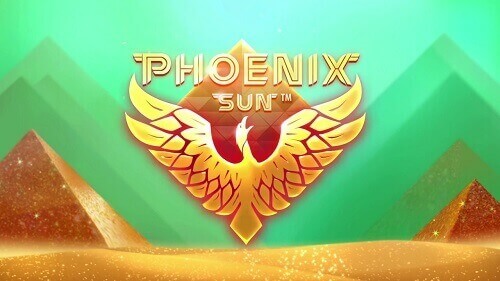 Phoenix Sun is a five-reel pokie with three rows and 243 paylines that can be increased to a total of 7776 paylines when the free spins feature is triggered. As previously mentioned, the game makes strong use of an Egyptian theme with pyramids and golden structures making up background images. As this is a Quickspin game, it isn’t really a surprise that all features have been beautifully designed to create a fully entertaining gameplay experience.

The game makes use of playing card designs (A, K, Q, J, 10) for lower value symbols and Egyptian people and gods for higher value symbols. The game does include two wild symbols, which are illustrated by the simple gold image and a phoenix. Both such symbols have the word “wild” on them. The “gold” wild symbol can be used to create winning combinations whereas the “Phoenix” wild is used to trigger the game’s respins feature.

The respins feature is triggered when the Phoenix wild symbol appears on a winning line. During this bonus game mode, the three blocks above the reels are removed to, and more symbol positions are revealed. Players will receive one free spin and will keep doing so until no Phoenix wild symbols appear on the reels.

Along with this exciting feature, Phoenix Sun also makes use of a free spins game mode. If players see five Phoenix wild symbols appear across the reels during a single spin, they will be awarded eight free spins. As previously mentioned, these free spins will be used on a set of reels that allow for 7776 way to win.

Quickspin really outdid themselves with Phoenix Sun. The game contains innovative features, makes use of a classic theme and provides players with the chance to win big cash prizes. All our reviewers believe that this is one of the best pokie games Quickspin has released and thus recommend that you give it go.