Many have looked for the ancient valley of Shangri-La, but very few have been successful in finding it. In Quickspin’s Hidden Valley pokie game, Australians get a chance to go on their own search for the utopia in a journey that may very well be filled with riches. Read on to find out more about this great game. 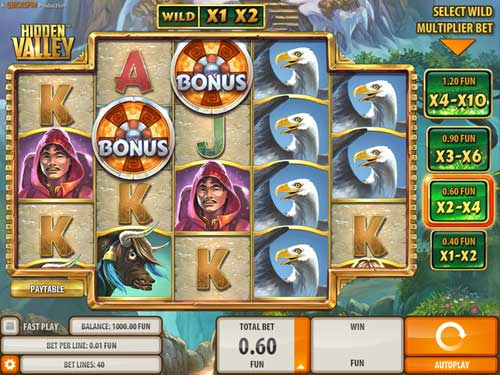 Hidden Valley is a five-reel slot that features three and four rows, and a total of 40 paylines. As with many Quickspin games, the title features a heavily-stylised design that is great to look at and very inviting. As to be expected with a game based on the Lost Horizon, the background features the beautiful Kunlun Mountains.

The title’s symbols feature theme-appropriate figures along with the standard poker playing card images (A, K, Q, J, 10). Theme-related symbols include an eagle, a Sherpa, a yak, and two adventurers (one female and one male). The game’s wild symbol is easily noticeable as it spells out “wild” in a big green square and stack on reels for extra multiples. The bonus symbol is represented by a giant circle-like symbol and also has the word “bonus” written across it.

Hidden Valley makes use of two major bonus features: Multiplier Wilds and a Free Spins bonus mode. The Multiplier Wilds feature allows players to select a multiplier to attach to a particular wager based on their bet level. Obviously, if players win the bet, their winnings will be multiplied by an amount selected prior to making the bet.

The game’s Free Spins bonus mode is activated by landing three scatter symbols on the reels. The outermost symbol determines whether the player receives an extra wild whereas the inner rings determine the number of spins the player has won. If they are lucky enough to win the extra wild, one of the character symbols will be temporarily made a wild symbol.

We enjoyed our time with Quickspin’s Hidden Valley. The pokie game’s multiplier bonus feature had us coming back for more several times over, and the unique theme was refreshing amidst all of the Asian and Egyptian-themed online pokie games we’ve recently reviewed.