Rub the genie’s magic lamp and unlock the all the riches you could ever imagine in Quickspin’s Genie’s Touch pokie game. With a beautiful Arabian theme, Australians are sure to be entertained in this interesting slot game that not only promises great riches but a memorable gameplay experience too. Read on to find out more. 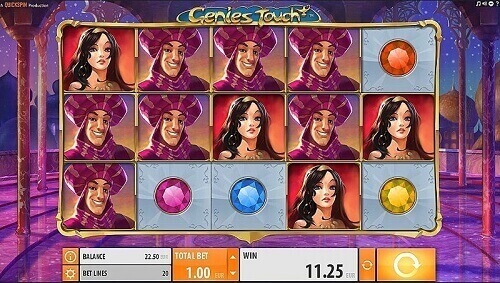 Genie’s Touch is a five-reel pokie game with three rows and a total of 20 paylines. As previously mentioned, the game is not exactly hard to look at, making use of stellar visuals (including a sunset you’ll just want to stare at) and immersive sound design.

The game’s symbols comprise of theme-appropriate symbols including multi-coloured gems for low-value figures and character images for high-value symbols. Still, the game does make use of a wild symbol as well as a scatter symbol that activates two separate bonus features.

The wild symbol (which is a golden image that spells out “wild”) does the thing that all players expect wilds to do in pokie games and this is complete winning combinations.

The scatter symbol (the genie’s lamp) activates the Genie’s Touch bonus feature when three or more appear on any of the reels. In this bonus mode, players create patterns with the help of the genie to create the best possible winning combinations.

The second bonus mode comprises of the free spins bonus mode, which can be activated by landing three genie’s lamp symbols on reels two, three and four. Players will be awarded 10 free spins on a second set of reels from which it is possible to make big wins.

Since its 2016 release, Genie’s Touch has grown to become a favourite among Australian players. It really is no surprise when one looks at all players have to gain when playing this Quickspin classic. But, don’t take our word for it – try Genie’s Touch at one of Australia’s best casino sites today!