Australian players familiar with IGT’s game catalogue will know that the software developer has taken something of a liking to wolf-themed slot games. Wild Wolf is one such pokie game that has in-time grown to become a popular favourite of many players. The game offers a fun gameplay experience as well as the chance to win big real money prizes. Read on below to find out more. 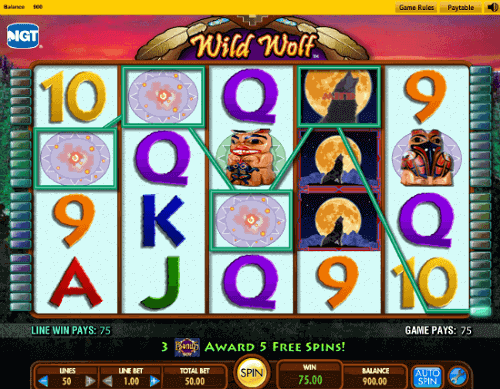 Wild Wolf is a five-reel pokie game with three rows and 50 paylines. As the game is wolf-themed, players can expect to go on a wild journey where the night is dark, but the dawn is sure to come (and the riches too.) The game doesn’t really make use of the best graphics, with symbols being oddly designed but the included bonus features and jackpot more than make up for those losses.

The game’s symbols comprise of both playing card images (A, K, Q, J, 10) and theme-related designs. Some theme-related designs that players can expect to see include two wolves and two carved statues. As can be expected, combinations made with playing card symbols are worth less than those made with the game-specific symbols. The game does feature a wild (wolf howling at the moon) and scatter symbol (a necklace around the word “bonus”.)

There are two bonus features in Wild Wolf. The first is that of the Stacked Wilds feature which makes it possible for wild symbols to fill up all positions on a reel. Quite simply, this means more chances to make wins. Then, there is the free spins bonus which can be activated by landing three scatter symbols on the reels. Players will initially be awarded five free spins but do have the opportunity to boost this number up to a total of 255.

While players who are familiar with IGT’s other wolf-theme slots (Wolf Run and Wolf Rising) will probably feel as if Wolf Run is a little bit too similar to the other two games, the game still delivers a solid gaming experience. We liked the bonus features included in the game as well as the fact that its possible to gain big payouts in these modes. Our review team believes it’s a game worth trying, especially if you’re at a loss of what to play.