Witness a love story between God and mortal in IGT’s Greek-themed pokie game – Golden Goddess! Feel what it is like to fall in love in a beautiful land filled with natural pleasures in this great pokie while attempting to make everything so much better with a sweet jackpot win. Read on to find out more. 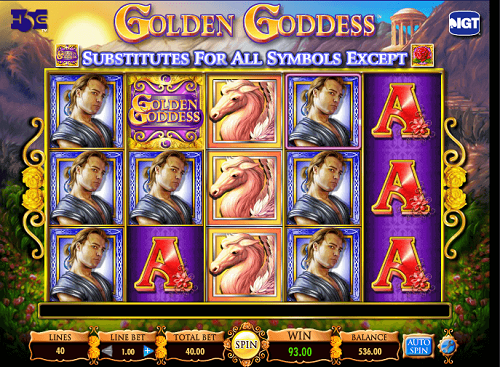 Golden Goddess is a five-reel pokie with three rows and a total of 40 paylines. The game makes use of beautiful photo-realistic graphics that will make players feel as if they’re actually living through their own Greek myth. The game’s background is filled with scenic imagery and spirals reminiscent of every image of Ancient Greece you have ever seen in a history textbook.

The game’s symbols are made up of a mixture of poker card images and theme-related designs. Some of the theme-appropriate images players will witness spinning across the reels include a horse, a goddess, a dove and a good-looking man. The goddess herself acts as the game’s wild whereas the red rose acts as the game’s scatter.

There are two major bonus features in Golden Goddess. These two features are as follows:

With a good theme, amazing features and an even better jackpot, Golden Goddess seems to have a lot going for it. The title gives a tired, old theme something of a new look and does it relatively well, which is why our reviewers here at Casino-Aus believe that it is, in fact, worthy of a recommendation.