Ever wanted to know what it was like to be the most powerful figure in the Ancient world? Well, now you can with IGT’s Cleopatra II pokie game – the sequel to the software developer’s most popular pokie title. Win absolutely massive amounts of cash as you traverse through Ancient Egypt, attempting to create rewarding combinations. 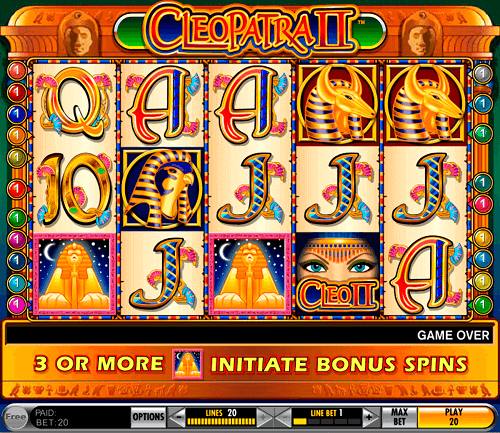 Cleopatra II is a five-reel slot game with three rows and 20 paylines. IGT has pulled out all the stops with this Egyptian-themed pokie game. It features a wide assortment of colours and wonderfully designed symbols. Added to this is an atmospheric soundtrack that pulls players right into the game.

The game features a mixture of theme-based and poker card symbols. Some of the related designs for higher value symbols include Egyptian gods Anubis, Bastet, and Horus. The game does feature a wild symbol which can be used to substitute for all other symbols (except the scatter) and is represented by the Cleopatra II game logo. The title’s scatter symbol is represented by the Sphinx.

As with all classic pokie games, Cleopatra II makes use of one major bonus feature – the free spins bonus mode. To activate this game mode, players must land three scatter symbols on a single payline after which they will be transported to a separate screen and made to select a box. The box the player selects will determine how many free spins they get, which can be anything between five and 15 free spins. It is important to note that a x3 multiplier is active for the duration of the free spins bonus mode.

Cleopatra II is a worthy successor to one of IGT’s most notable pokie games of all time. The title’s compelling (but very familiar) theme and free spins bonus feature will have Aussies playing for hours on end. If you’re a big fan of the Ancient Egyptian era, we really recommend that you give this game a try.