It’s about to get good, bad and ugly in Betsoft’s western-themed pokie game – The True Sheriff! Clear the streets of all the no-good criminals and reap the big cash rewards in this fun stylised slot game. Read on to find out more. 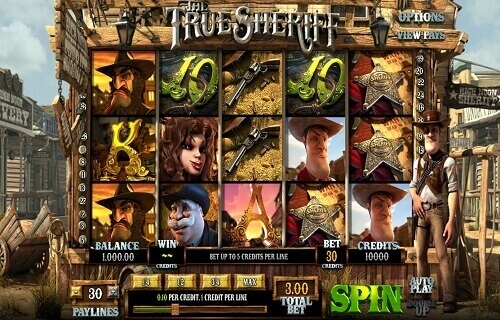 The True Sheriff is a five-reel pokie with three rows and 30 paylines. As one of Betsoft’s most popular games, one can almost expect the game to make use of great 3D graphics, an immersive soundtrack and a setting that makes you feel as if you’re living in the Wild West yourself.

The game’s symbols are made up of theme-related icons along with some heavily stylised playing card icons (10, J, Q, K, A) Representing low-value figures. Some theme-appropriate designs include badges, bandits, tavern girls as well as the sheriff. There are two bonus symbols to look out for, and they are the gun and the sheriff’s badge.

There are three major bonus modes players should aim to activate in The True Sheriff. The mode involving the gun symbol sees five icons randomly turned into wild symbols when it appears on the reels. There will be a short period in which the sheriff will shoot up the reels and then the board will be evaluated to reveal potential prizes.

The second major bonus feature is that of the free spins feature, which can be activated by landing three badge symbols on the reels. Players will then be awarded between 10 and 15 free spins as well as an instant cash prize.

Finally, there is a special game mode called Showdown in which players attempt to guess the outcome of different scenarios for big cash prizes. This game mode will be triggered if players land a combination that involves the sheriff, three guns and the bad guy on the reels.

The True Sheriff is a true doozy for fans of old spaghetti Western films. The fact that it makes you feel as if you’re living in some Western town is reason enough to give it a go. If you’re looking for profit related reasons, you will find that the game’s bonus features also give players ample opportunities to win big.