Explore time travel and evade all sorts of evil in Betsoft’s steampunk-themed pokie game – The Curious Machine. Go on an interesting adventure filled with amazing stops and likeable characters as you play for the chance to win a big cash prize. Read on below to find out more. 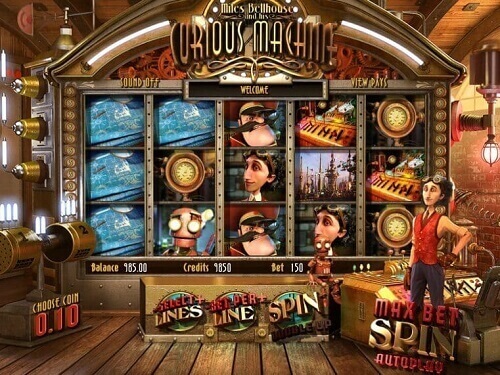 The Curious Machine is a five-reel pokie game with three rows and 30 adjustable paylines. The game features Betsoft’s trademark 3D graphics and, as previously mentioned, a steampunk theme. The art style is unique and interesting; it alone makes the game worth playing. The interesting soundtrack combines with visuals to create an experience that really is unmissable.

The game’s symbols are made up entirely of theme-related designs. Some of the symbols players will see spinning across the reels include Miles Bellhouse (the game’s main character), General Traytor (the game’s antagonist), a cityscape, a robot, blueprints and a control panel. The game features both wild and scatter symbols. The wild symbol is represented by the vortex, and the scatter is represented by the weird dinosaur icon.

There are three major bonus features included in The Curious Machine. The first involves the wild symbol. When players the wild symbol lands on the reels and no wins have been created, it will turn into a vortex in which adjacent symbols will be sucked in. The feature may lead to winning combinations. The second bonus feature involves doling out random respins in which a single reel is respin and may lead to a potential win.

The third and final feature is perhaps the most exciting of all as it involves free spins. If players are able to land three scatter symbols on the reels, they will be awarded 10 free spins. All wins in this bonus round are also multiplied by up to 5x the original betting amount.

The Curious Machine is a creative addition to the Betsoft library. Although the game may feature a jackpot that some players will deem small, our reviewers had loads of fun with the title, especially the vortex wilds. Overall, we really recommend that our players give this game a go as they are pretty much guaranteed a good time.