Prepare to engage in some Japanese delicacies in Betsoft’s food-themed pokie game – Sushi Bar! Just as in Mamma Mia, players are thrust into the role of a restaurant owner, with the aim of pleasing their famished customers while reaping the cash rewards. Read on to find out more. 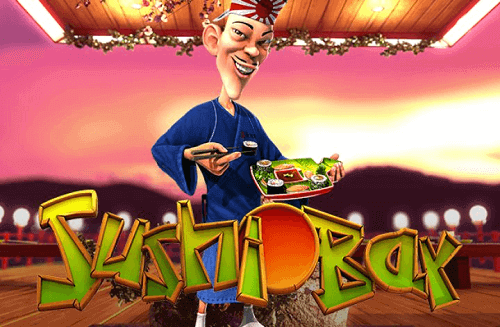 Sushi Bar is five-reel, three-row slot game with a total of 25 adjustable paylines. The game’s backdrop is that of a Japanese-themed restaurant, which looks almost life-like due to Betsoft’s amazing 3D graphic styling.

The game’s symbols are made up of a mixture of theme-based and playing card symbols. An important thing to note about the playing card symbols is that they have been designed using theme-related imagery to represent playing card letters. (For example, the letter J is represented by a giant J-shaped plate with sushi on it.) The “true” theme-appropriate symbols feature a tea set, a set of knives, a sushi platter and an empty plate.

The title does have a wild symbol which is represented by a bottle of soy sauce and doubles the winnings of any combination it completes. There is also a scatter symbol which is illustrated by a traditional Japanese fan.

Sushi Bar makes use of only a single bonus feature; a free spins mode. It can be activated by landing three soy sauce symbols on the board. Gamblers will be awarded eight free spins; however, this number will increase if more scatter symbols appear on the reels.

During the free spins mode, players will be awarded 150x their bet for landing two scatter symbols on the reels. All winnings are also subject to x2 multiplier.

Sushi Bar is a pokie game for players who love 3D slot games but like to keep it simple too. We believe that Betsoft put a load of work on this great title and believe its well worth a go.