Madder Scientist is the much-anticipated sequel to the very popular Mad Scientist pokie game. In this science-themed pokie, Aussie players attempt to come up with chemistry solutions that prove to be extremely useful to humanity as well as one’s wallet. Read on down below to find out more. 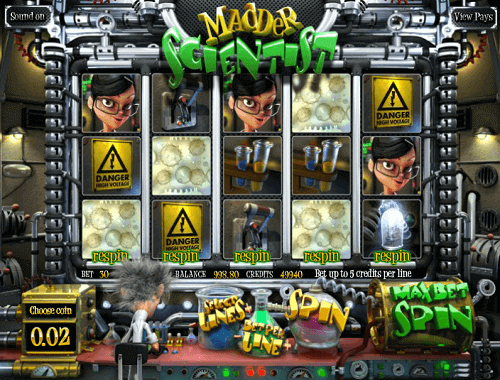 Madder Scientist is a five-reel slot game with three rows and a total of thirty paylines, which are adjustable. The science-themed game follows the story of scientist Dr Walter Prescott as he attempts to make some breakthroughs in the realm of chemistry. As with most high-quality Betsoft games, Madder Scientist makes use of some amazing 3D visuals.

The game makes use of only theme-related symbols. Some designs include a dog, a microscope, cells, test tubes and Dr Prescott himself, among others. The game does not feature any wild symbol but does make up for this fact by making use of three different bonus symbols.

As one may have guessed with three bonus symbols, Madder Scientist features three unique bonus features. Bonus modes include the following:

In addition to these great bonus features, players also have the option of respinning a single reel after each spin in the hopes of creating a win.

Madder Scientist is a fine addition to the Betsoft game library. The game is simply a large improvement on an already popular game, making for an even better gaming experience. Players can expect to get some decent wins while playing with an RTP of 95%.