Grab your hat and archaeology tools and climb down into the caverns of the Great Pyramid in Lost. This adventure-filled pokie, developed award-winning Betsoft, is full of magic, quests, and ancient treasures. The graphics and animation are vivid and engaging. While the soundtrack moves with the excitement of the pokie, punctuating whatever is happening on screen. Read on for more about Lost. 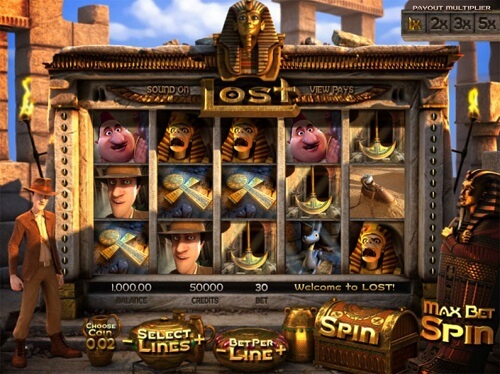 Join archaeologist Dr Dakota Bones and his assistant Farooq on a journey to find Ah-Amdad’s treasure. Lost is a five-reel three-row pokie with 30 paylines set on stone ruins with Tutankhamun mask in top. The bottom of the screen is lined with golden vases, an urn, and a treasure chest. Dr Bones watches as you play on the left-hand side. The symbols on the reels include the doctor himself, Farooq, the Ankh, Eye of Horus, a swinging ax, a golden mast, Anubis represented as a dog, a scarab beetle, a blade, a water bottle, and a fearsome mummy. The monkey is the wild symbol.

The high paying symbols are Dr Bones, the fearsome mummy, Farooq, a blade, the Ankh, Anubis, and a water bottle. There may not be a free spins feature or scatter in Betsoft’s Lost. However, there are many entertaining bonus rounds to keep you enthralled.

The centre wild reel triggers when the mast appears on the centre reel. This gives players a times two multiplier. Also, landing a winning combination causes the centre reel to respin, giving extra prizes. In this feature, players can get up to a times five multiplier.

Then there’s the Monkey Click Me bonus round. When the monkey icon appears anywhere in the fourth reel, prepare for some great payouts. The monkey will jump out of the reel and prompt you to select six plates. Each plate hides cash prizes.

Lastly, there’s the Mummy Tomb Bonus. This is the most lucrative round in Lost. Land four Eye of Horus symbols on any reels to trigger it. In this round, players must help Dr Bones choose the correct door. Be on the lookout for mummies creeping all over the tomb.

Betsoft has created another visually pleasing and entertaining game. Loaded with fun animation that immerses players in a world created by movies like The Mummy (the old classic). However, there are a lot of dry spins so if you’re looking to make loads of money off a pokie, this game will leave you wanting.