Revisit Mary Shelly’s classic novel Frankenstein and all its glory in Betsoft’s Frankenslot’s Monster pokie game. Craft an absolutely terrifying being as you venture to win big cash prizes in this great title. Read on to find out more. 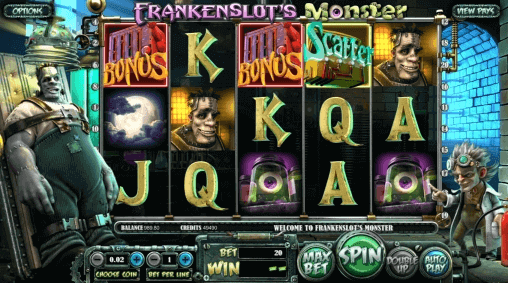 Frankenslot’s Monster is a pokie with five reels, three rows and a total 20 paylines. The game features amazing 3D graphics that make for a terrifying experience along with a wild soundtrack that is sure to immerse Australians in the online gaming experience.

The title makes use of a mixture of theme-appropriate and playing card symbol designs. Some of the game-specific icons include an eyeball in a jar, the monster, a full moon, an electrifying machine and the monster itself! The game features a wild symbol that is easily noticeable as it spells out “wild” with electric affair. Scatter and bonus symbols are also available and similar to the wild symbol also read their respective terms across the icon.

There are two major bonus symbols in Frankenslot’s Monster for Aussie players to take advantage of. The first is that of the free spins bonus which is activated by landing three scatter symbols anywhere on the middle reels. This will result in the monster being electrocuted, and players will be awarded eight free spins and up to three additional wild symbols.

The second major bonus round is activated by landing three bonus symbols on the reels. Players will then be made to play a mini-game in which they adjust knobs and levers to electrify the monster. The reward for doing this is a random multiplier which can reach a maximum of 25x.

Frankenslot’s Monster is a wonderful game with amazing visuals and rather interesting bonus rounds. The title really is one of Betsoft’s best efforts, and we really cannot recommend enough that Australians have a go at it.