Betsoft’s Charms & Clover is a great pokie title based on Irish mythology, and there really is no better theme than one that is fabled to lead you to a pot of gold at some or other time. Play through this hilariously fun slot game with a tiny, green leprechaun at your side and see if you’ve got any of the good, old luck of the Irish. Read on to find out more. 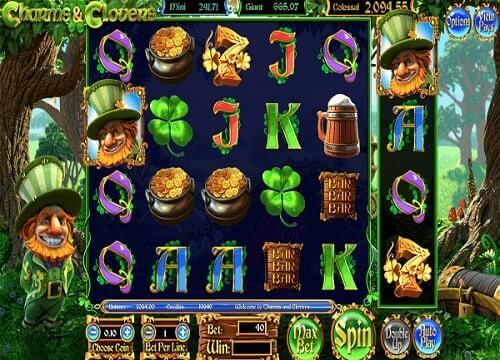 Charms & Clover is a six-reel slot game with four rows and 60 paylines. As with many of the best Betsoft games, the title makes use of 3D graphics to create a lovely, little fantasy world reminiscent to those seen in popular Dreamworks films. The backdrop for the reels is an enchanted plain that looks so inviting; you’ll wish it were real. The game’s sound effects also adds to overall gaming experience.

The game’s symbols are made up of a mixture of poker playing card images (A, K, Q, J, 10) and theme-appropriate designs, including a four-leaf clover, beer mug, number seven and a horseshoe, among others. The wild symbol is the clover and can be used to substitute for other symbols.

There are four bonus modes in Charms & Clover, and they are as follows:

Quite simply, with so many lucky tokens on the reels, we feel that all players will be walking away from this game with a win. At the very least, a memorably fun experience.