Get ready to strike it rich drilling for oil in Betsoft’s exciting Black Gold pokie game! Join the rush for arguably the earth’s most valuable resource, and reap the intensely tempting rewards in this mining-themed pokie game. Read on down below to find out more. 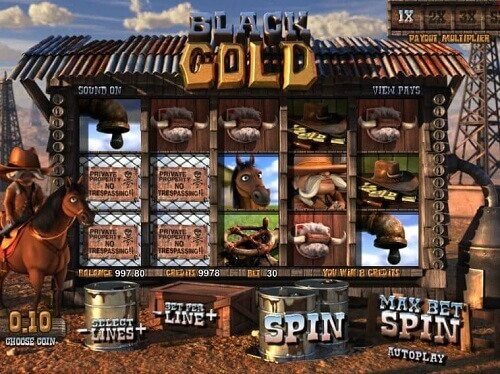 Black Gold is a five-reel pokie with three rows and a total of 30 paylines. With the game being a title produced by Betsoft, it really is not a surprise that the title makes use of immersive 3D graphics and sound design. Australian players will really feel as if they’re out there running an oil rig.

The title makes use of a number of theme-appropriate symbols. For a game based on oil drilling in the Old West, this means images such as buffalo horns, an oil tap, oil barrels, a cowboy hat and Ol’Bill – the game’s mascot. The title makes use of both wild and scatter symbols which work in increasing your winnings.

The game makes use of three bonus features. The first is the Night Time Free Spins mode, which can be activated by landing three or more barn symbols on the reels. All wins made in the Free Spins Bonus mode will be multiplied by 10, and the barn also acts as a wild in this mode to complete more combinations.

The second bonus feature is that of Drilling for Oil mode, which can be triggered by landing three or more drills on the reels. Players will then be given the option to select between three drills and win a prize.

The third and final bonus feature is the literal bonus game. Players can activate the feature by landing the oil pump symbol on three reels. They will then need to guess whether the number that follows that on the screen will be lower or higher. Players return to the regular play when they get four consecutive guess right or wrong.

Black Gold is an interesting addition to the Betsoft pokie library. Overall, we enjoyed our time with it. Although the game features three bonus rounds, some may be disappointed by the payouts in each of them. We still think its still worth giving Black Gold a go through. Aussies can do that at any of the casinos listed below.